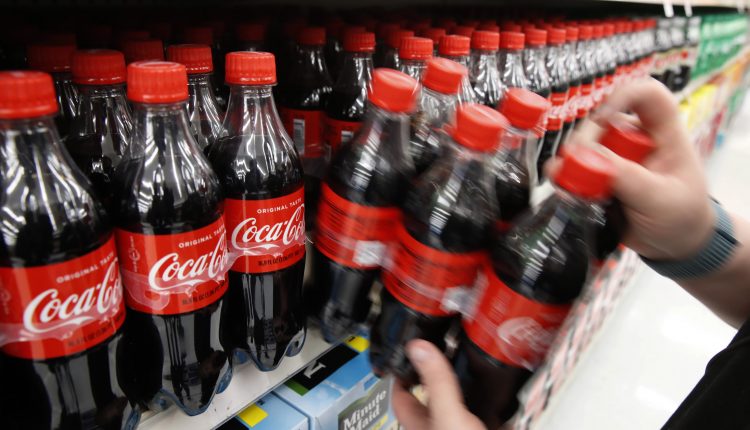 A worker replenishes a display of soft drinks from Coca-Cola Co. in a store in Orem, Utah, United States on Tuesday, February 9, 2021.

Coca-Cola reported Monday that quarterly demand was unchanged from the same period last year as North America and Western Europe take longer to recover from the coronavirus pandemic.

However, the global case volume in March returned to 2019 levels.

“We are encouraged to see improvements in our business, particularly in markets where vaccine availability is increasing and the economy is opening, and we remain confident in our full-year guidance,” said CEO James Quincey in a statement.

The company’s shares rose less than 1% in premarket trading.

The company reported, relative to Wall Street expectations based on an analyst survey by Refinitiv:

Net sales rose 5% to $ 9.02 billion, beating expectations of $ 8.6 billion. Organic sales increased by 6%, while the unit volume remained unchanged compared to the same period in the previous year. Coke said demand has improved every month of the quarter, thanks to markets like China, where uncertainty associated with the virus has decreased.

The company’s sparkling soft drinks segment, which also includes soda of the same name, posted 4% volume growth for the quarter. While the North American wells business is still under pressure, growth in India, China and Latin America offset these declines. The higher demand in China and India also contributed to the nutrition, juice, dairy and plant-based beverages segment, which saw volume growth of 3%.

Coke’s hydration, sports, coffee, and tea segments were hardest hit, with a volume decline of 11%. The coffee business was down 21% due to the virus’ impact on Costa cafes. The hydration category, which includes Dasani and Smartwater, saw a 12% decrease in volume as fewer consumers around the world bought single-use bottles of water. Demand for cola tea products fell by 6%, while sports drinks like Powerade only saw volume fall by 1%.

In a separate filing, Coke announced plans to publicly list Coca-Cola Beverages Africa. The company will sell some of its holdings in the IPO, which is expected within the next 18 months. The shares are listed in Amsterdam and Johannesburg.