Discovering a Foothold for Nordic Snowboarding in Rural Alaska 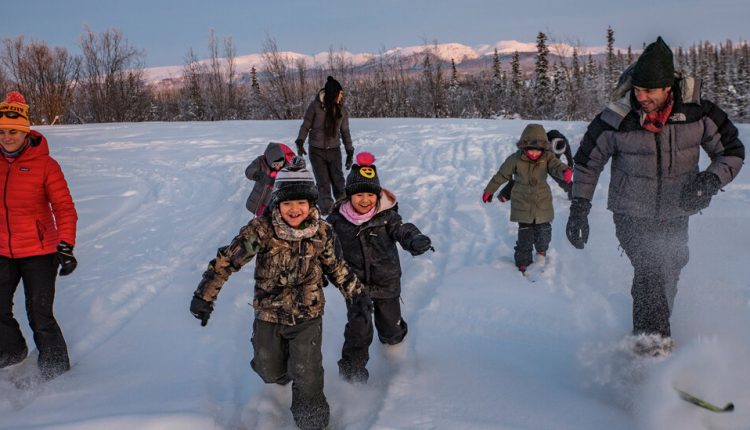 It was minus 40 degrees Fahrenheit and a lot of the kids were wearing jeans. You forgot to bring snow pants again. But they still wanted to go skiing, and that’s why we were there, so we took them to ski – even if some of the less appropriately dressed kids returned early.

I was in Nulato, a Koyukon-Athabascan village of a few hundred people on the Lower Yukon River in Alaska’s western interior. I volunteered as a ski trainer with a program called Skiku – a playful portmanteau of the Inupiaq word for ice, Siku, and the English word ski.

Skiku’s goal is to create, or in some cases continue a tradition of Nordic skiing in rural Alaska, both as a healthy pastime and as a means of transportation.

In the years leading up to the coronavirus pandemic, dozens of villages participated in the program, most of which were visited by a group of trainers each spring. (The ski equipment stays all year round.)

I’ve been on the program since 2015 when I first traveled from my home in Fairbanks to the Inupiat village of Noorvik on Alaska’s west coast. I had never been to an Alaskan village before, most of which were Alaskan.

It’s not uncommon for white urban Alaskans like me not to have been to the smaller villages of the state. Most of the villages are inaccessible by road and most people do not leave without a specific reason.

In recent years it has been unexpectedly satisfying to see the sport prevail in the community. Some of the younger children – for whom seven years is literally a lifetime – have never known a world without annual visits from Skiku.

The best skiing at Nulato was on a snowmobile trail near the school that made a 1.6 km loop. We drove the same lap over and over again. The other coaches and I took turns at the end of the pack as we found it impossible to stay warm while skiing with the slowest kids.

The trail went into a wetland area before going back through the forest and it was good for skiing in every way. Although Nulato has a well-developed road network with little traffic, the roads are icy and unforgiving for the children who inevitably fall down. Snowmobile trails generally make for much better skiing.

The streets don’t go that far either, as all streets in Nulato are local – that is, there are no streets in or out of town. The only way to reach the village is by river or by air.

Although I visited six villages as a volunteer ski trainer, the photos shown here are from Nulato in 2020, Arctic Village in 2018 and two trips to Kaktovik in 2018 and 2019.

The trips to Arctic Village and Kaktovik were part of a separate (and unspecified) program set up by one of Skiku’s founders, Lars Flora, a two-time Winter Olympic player. Lars’ program is slightly different from Skiku; It includes skijoring – being pulled on skis by mushing dogs, which is as fun as it sounds – and kite skiing. But the general idea is the same.

The Arctic Village is at the foot of the Brooks Range, just outside the southern border of the Arctic National Wildlife Refuge, which the Trump administration opened to fossil fuel development. Kaktovik is located on an island in the Beaufort Sea, off Alaska’s north coast and within the confines of the Refuge.

The area around Kaktovik is called the coastal plain for a reason: in winter, when the sea is frozen over, Kaktovik is one of the few features on a blank, white canvas that is not interrupted even by the sea.

North Rope oil platforms are not visible from either village, but the effects of the oil money are very evident. Kaktovik is located in the North Slope Borough, which has high property tax revenues from its oil infrastructure in Prudhoe Bay, as well as other revenues from the oil industry. The school district is well funded and many of the residents are shareholders of Arctic Slope Regional Corporation, an Alaska-based company that handles many profitable oil contracts.

Arctic Village, on the other hand, is not part of the North Slope Borough and does not benefit from oil development to the same extent. Unlike the shiny school in Kaktovik, it was difficult to find a toilet that worked in the school in Arctic Village.

(Tragically, Harold Kaveolook School in Kaktovik was destroyed by fire in February 2020. In rural Alaska, where schools serve as community centers for people of all ages, the loss of the school was enormous.)

Skiing at Arctic Village was second to none. Most locals only heat their homes with wood, which they collect from the many snowmobile trails that wind through the village and into the surrounding forest. And since the residents often drive older two-stroke machines that lack the strength to climb steep hills without running on them, the paths are all gentle and without abrupt curves on the slopes – ideal paths, in other words, for skiing.

Kaktovik is a more difficult place to promote skiing. The terrain is completely flat, and without any significant topography, skiing in the wind-hammered tundra outside the village is not that attractive. When we took the children outside, we often made jumps on mounds formed by the multi-story snowdrifts.

When I visited Kaktovik in early May 2019, we couldn’t ski outside for the first half of the week due to a relentless wind storm. When the wind finally subsided, the other coaches and I were walking in weak sunlight at 11 p.m. and were attacked by a polar bear.

The rest of the week was spent on a very limited schedule. When we were skiing, it was under the supervision of two village bear guards armed with weapons. (Kaktovik is a top polar bear spotting destination in late summer, but this troubled truce with the bears is creating increasing problems with encouraged bears coming into town.)

There is a lot of misunderstanding in the cities about rural Alaska. In the worst case, urban Alaskans often view the villages as desolate and uninviting places. But during my time as a ski instructor, I found exactly the opposite.

The tight social fabric in small towns is often found repeatedly. But in rural Alaska, it’s something that is felt in subtle ways – how the older children help the younger ones without a trace of resentment, or how all adults in the city are essentially custodians for all children.

During my time at Skiku, I understood my home state much better and improved my humiliatingly somber understanding of its physical and cultural geography. Sometimes I think that this is the real value of the program: in order to bring us white city Alaskans to the villages to see what life is really like there, we can stop continuing apocryphal and reductive narratives. After all, without Skiku, it would be difficult for me to find a reason to spend a week in a different village every year.

But in the end my personal motives don’t matter, and the children don’t care if they teach me about their lives. They just love to ski.