New or used, automotive costs climb as stock dips this…

Every day U.S. knowledge on April 16 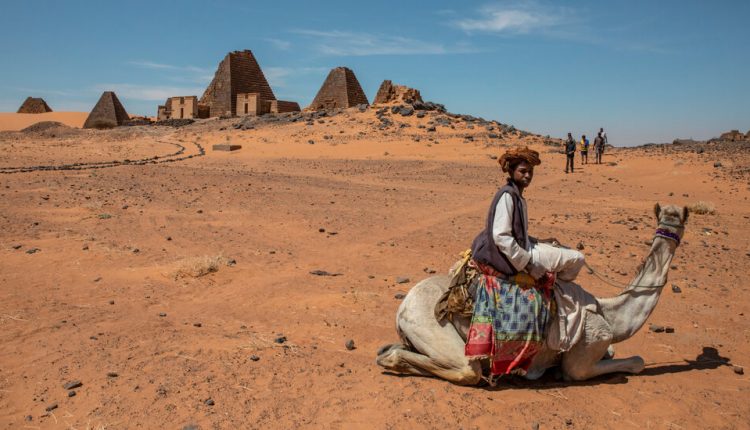 The site was almost deserted. Some locals were cleaning up after the recent restoration work, and young cameleers were looking for customers. In the midday heat, the bright glow of the desert helped draw my attention to the pyramids themselves.

Located on the seashore of the Nile, about 150 miles by car northeast of the Sudanese capital, Khartoum, the Meroe Pyramids – around 200 in total, many of them in ruins – appeared to be in perfect harmony with the surrounding landscape, as if the wind had it their edges smoothed to accommodate them between the dunes.

During the 30-year dictatorship of Omar Hassan al-Bashir, who led Sudan through a long series of wars and famines, the pyramids of Meroe saw few international visitors and remained relatively unknown.

Among the many aftermaths of the revolution that led to the overthrow of Mr al-Bashir in 2019 – along with the removal of Sudan from the list of state sponsors of terrorism in the US in 2020 – was the hope that the country’s archaeological sites would be preserved could provide wider attention and protection, not only from researchers and international visitors, but also from Sudanese citizens themselves.

I traveled to Sudan in February and March 2020, just a few days before pandemic lockdowns broke out in my home country, Italy.

I was drawn to a nation that had managed to break free from dictatorship through the strength, creativity and determination of its people. And I really wanted to meet and photograph the protagonists and young actors of this historic moment.

At the end of 2018, the former dictator al-Bashir stopped subsidies for fuel and wheat, which led to a rise in prices. The reaction of the people, exhausted by economic crises, was not long in coming.

A wave of demonstrations filled the streets of several cities far beyond the capital, Khartoum. These were Sudanese of all races, classes and generations – but mostly students and young professionals.

During my visit, Amr Abdallah and Tawdia Abdalaziz, two young Sudanese doctors in their twenties, took me through the streets of Khartoum to see the symbolic sites of the revolution and showed me miles of public art – graffiti, murals, verses – that marked those Places of protests.

When they told me about Meroe and Ancient Nubia, the name of the region between Egypt and Northern Sudan, I found that the majority of Sudanese never had the opportunity to visit these places – including the doctors themselves.

For me as an Italian, that meant never having had the opportunity to visit the Colosseum in Rome.

The ancient city of Meroe, which has been a UNESCO World Heritage Site since 2011, is a four-hour drive from Khartoum, northeast of the Nile. The pyramids here, which were built 2,700 to 2,300 years ago, bear witness to the size of the Kingdom of Kush, a great power from the 8th century BC. Until 4th century AD

Compared to the monumental pyramids in Giza, Egypt, the structures at Meroe are considerably smaller – from about 30 to 100 feet tall compared to the 455 foot tall Great Pyramid – and their slopes are steeper. As in Egypt, however, the pyramids serve as royal tombs.

In recent years, the pyramids of Meroe, as well as other Sudanese archaeological sites up and down the Nile, including the pyramids of Nuri further north, have been threatened by rising floods and the continuing effects of wind and sand erosion.

Plans for new dams also threaten certain archaeological sites in Sudan – as in the past when the construction of the Merowe Dam displaced tens of thousands of residents and sparked a frenzied archaeological hunt for artifacts before they were flooded by the dam’s reservoir.

Perhaps the most notorious act of destruction in Meroe, however, is attributed to the Italian treasure hunter Giuseppe Ferlini, who destroyed several pyramids in the 1830s in a ruthless search for ancient artifacts.

Nour, our driver, was used to driving visitors to Meroe with one hand on the steering wheel and the other hand holding his cell phone. Even so, we sometimes got lost in his four-wheel drive Toyota as we moved from one place to another through vast stretches of desert.

Local tour guides at the entrance to Meroe invited us for camel rides to remind us that this is a proven, if often neglected, tourist attraction.

At the archaeological site of Naqa, about 50 miles southwest of Meroe, the atmosphere was very diverse.

We walked alone between buildings, including a temple dedicated to Apedemak, a lion-headed warrior god worshiped in Nubia. On the opposite side of the site, ram-shaped sculptures accompanied us to the entrance of the Amun Temple, which was built around the first century AD and is considered to be one of the most important archaeological buildings and tourist attractions in Sudan.

A stone’s throw from the Temple of Amun, a golden sunset lit a small herd of goats, followed by a young goatherd. It would be dawn soon. The drive back to Khartoum was long and our driver warned me to drive faster.

Back in Khartoum, where the two main tributaries of the Nile – the White Nile and the Blue Nile – meet, Dr. Amr and Dr. Tawdia together with her friends to celebrate a birthday.

In the midst of the songs and dances, Dr. Tawdia approached me to ask what I think of the archaeological beauties of her country – and to discuss the future of Sudan.

“The Sudanese people have the right to reclaim their country,” she said, adding that she and her friends long for a democratic society that can be open and accessible to all.

And she added that they want a country that can showcase its treasures to its visitors and its people.

Alessio Mamo is an Italian photojournalist from Catania, Sicily who focuses on refugee displacement and humanitarian crises in the Middle East and the Balkans. You can follow his work on Instagram and Twitter.

Leon Black to Step Down as C.E.O. of Apollo

Is It Secure to Go Again to Indoor Group Train Class on the Fitness center?