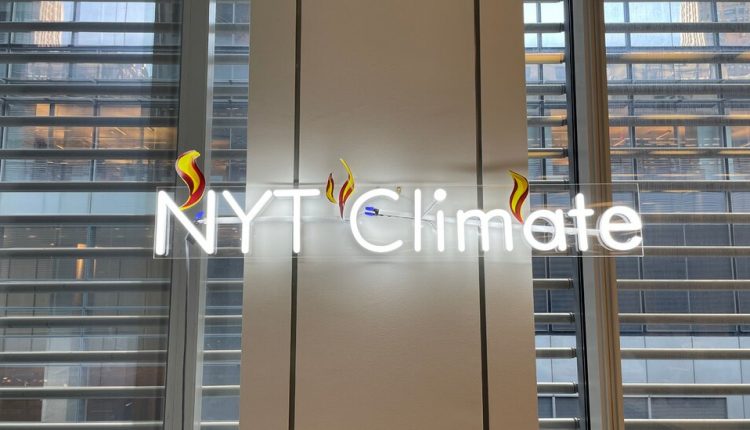 Times Insider explains who we are and what we do, and provides a behind-the-scenes look at how our journalism comes together.

How turbulent was 2020 on the climate front? It was a year when wetlands burned. And beyond the fires that devastated South America, Australia, and the American West, communities around the world have been ravaged by extreme heat, record-breaking storms, and soaring seas. The Times Climate Action, with more than a dozen journalists from the fields of research, science, politics, and image recorded everything. With the year 2021 approaching, climate editor Hannah Fairfield offered more perspective on what has happened and what lies ahead.

2020 appears to have seen the beginning of what scientists have warned about – extreme weather on many fronts and more severe climate-related disasters. You and your team have been covering this all along. But did you still surprise you this year?

The year started with fires in Australia, and all year round it seemed like areas around the world were on fire, culminating in California’s worst wildfire season and infernos in places that rarely burned. At the same time, there have been more large tropical storms in the Atlantic than ever before.

The Climate Desk covers all disasters related to climate change, such as droughts, forest fires, intense hurricanes and extreme rainfall. The science linking these catastrophes directly to the rapid warming of the planet is becoming clearer, but the impact we’ve all seen this year has been shocking.

How has that affected the reporting?

It was all the more important that we show the readers how different this year was. Since visual storytelling is one of the desk’s strong points, we drew on it and used data visualization and mapping, drone photography and video, and interactive design to tell these powerful and very human stories.

Earlier this month, John Branch wrote a lyrical piece about how many of California’s most beloved and majestic trees – sequoias, redwoods, and Joshua trees – were destroyed in forest fires, and scientists say their very survival is threatened like never before. We brought the visual evidence of the destruction to readers in a way that no one has had before.

2020 was a turning point in many ways, and one of them was the more general realization that the effects of climate change are not decades away, but are already there. We can see it all around us. The big question is: how do we make the necessary changes to avoid the worst consequences? It is absolutely possible. It just takes the will to do it.

Is there a climate issue that, while significant, has not yet been fully addressed by the public?

The threat of methane leakage from oil and gas wells is something we are all just beginning to understand. There are huge amounts of methane – an incredibly powerful greenhouse gas – invisible and uncontrolled, flowing into the atmosphere. In the US, reporting of these leaks is voluntary by companies and the Trump administration has reset inspection requirements.

Last year, Hiroko Tabuchi, a climate reporter, and Jonah Kessel, a videographer, spent weeks in the Permian Basin in Texas using an infrared camera to visually record the leaks. What they found was amazing. Rhode Island Senator Sheldon Whitehouse cited the Senate report to call for an investigation into the industry’s impact on deregulation.

Satellites that may be able to identify methane leaks are gradually coming online and what they find may be extremely revealing. Oil and gas sites around the world – many of which have been abandoned for decades or more – can be one of the greatest unrealized climate threats.

Every year seems to bring its share of gritty climate news. Is there anything that made a positive impression on you in the past year, be it an innovation or another development?

Some of the positive results of this year were how quickly stories could make an impact. One major visual project we did this year focused on how historical racist housing policies have left a terrible legacy that climate change is now making worse. In the 1930s, federal officials across the country “redefined” certain neighborhoods and marked them as risky investments, often just because the residents were black.

Today the same neighborhoods are among the hottest neighborhoods in summer. A legacy of divestment has left them with fewer trees and lots of heat-retaining pavement. The maps and data were strong: some previously redlined neighborhoods are on average up to 12 degrees hotter than whiter, more affluent neighborhoods that were preferred for investment in the 1930s. This can mean the difference between an uncomfortably hot day and a deadly hot day.

But because of our history, some cities are trying to reverse this. It already has a direct impact on Richmond, Virginia, a city that featured prominently in our coverage. The story was cited by the Chesapeake Bay Foundation on a grant for planting hundreds of trees in Richmond areas, and the Richmond Mayor unveiled a plan to build five new “green spaces” in hotter areas of the city.

Which topics and questions will the climate team be closely monitoring in 2021?

The next year will be a big year for international climate negotiations. With the 2020 climate summit canceled, there are great expectations for the next meeting in Glasgow, Scotland, in November 2021. When the Paris Agreement was signed in 2015, almost every country in the world was committed to working together to reach global borders limit warming to well below 2 degrees Celsius. But the hard work – the really hard work figuring out how to achieve those goals faster and faster – is at an early stage. We will pursue it.

In a reversal of President Trump’s policies, President-elect Biden plans to resume the Paris Climate Agreement and see climate change as part of the leadership of any cabinet position. But he will face his own challenges. What are some of its greatest?

Mr Biden’s goal is to get the United States to zero emissions by 2050. This is one that other major carbon-emitting countries have also set, and that scientists say is necessary to change the current course of warming – basically to smooth the curve.

At the moment, the nation is completely incapable of achieving this goal. To achieve this, major changes will have to be made over the next 10 years. As much as possible has to become electric: cars, trucks, house and building heating and large parts of industry. Then new wind and solar energy will have to go online to meet this increased demand, and the power grid will have to grow enormously to meet the new supply. It is a huge challenge and the Biden government needs to figure out how to build the political will to make it happen.

They Appear to Assume the Subsequent 4 Years Will Be Regular

Inflatable Costume Could Be Behind Outbreak at California Hospital